On Thursday, Kathy and I decided to rent a car to drive to Long Island for the last stop of the NACT series, which was a wicked race, put on by Myles Romanow. Because the drive was about 6 hours +, depending on city traffic, we wanted to divide it into two legs to ensure plenty of time. So we drove and we drove, like Batman and Robin: Calm Kathy at the wheel and fidgety me navigating. That girl takes punches with sugar to help the medicine go down. On the way out of Gettysburg, the car in front of us hit a deer. I was flipping out, typing like mad on my iphone to figure out who I could call to come put the poor deer out of it's misery. Meanwhile, Kathy was stone faced and may have muttered "oh, shoot". Then, later in the drive I thought I had messed the directions up and was freaking that we were stuck, turned around, and lost in the maze of NYC. While Kathy, like a rock, was steady at the wheel in the mayhem of driving near the city. It's remarkable how well she keeps her cool, while I feel like a rabbid rabbit with Tourette syndrome.

We were both craving and in need of a solid night's sleep in a plush bed. We passed a Ramada, a Holiday Inn, a Hampton Inn - none were good enough. We spotted a chichi Sheraton and were sold. The beds were a little slice of heaven and we both passed out for an undisturbed and hazed 11 hours. It was delicious. After a little breakfast the next day, we were off for another hour and a half to Sag Harbor. More hectic navigating because our host family's house couldn't be found on Mapquest or Google maps. Eventually we succeeded, then met up with Anna and got out to the course to give it a go.

Sinead and Dennis were our hosts for the weekend. A lovely house with lovely people. We shared some great food and stories, and it was a very fun weekend. I feel so thankful for some of the connections I have made through bike racing, and this is for sure one of them. I have met all sorts of people, for better or for worse, and every now and then you meet people like Sinead and Dennis who make it all worth while. The two of them planned the building of the house together: 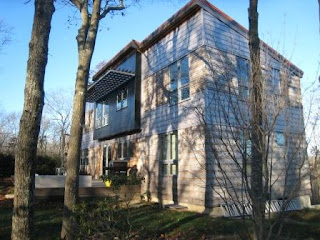 The attention to details is unfathomable to me. Check out the stairs! They actually had to be built into the framing of the house, so in no way were they an afterthought. 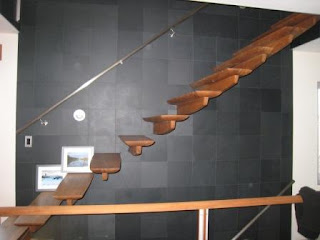 Saturday's race was frigid. The temperature was 20F, but there are wicked winds because it's on the ocean. With the wind chill it was about 10F. I don't think I ever actually warmed up because I felt slow the entire day. I was pleased with how I rode technically and tactically for the first half of the race, but never felt like I had any power. Then it just all went down the toilet.

After a kicking dinner on Saturday I was ready to give it another go. Sunday was warmer and I finally had my head screwed on straight. Got the whole shot (is it hole or whole?) beside Georgia and hung on for dear life for the 'start lap' and part of the first lap. Here's proof: 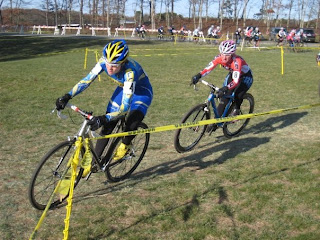 But then I botched a steep little ride up and she easily powered away. It was thrilling to ride her wheel and see how smooth, fluid, and powerful she really is. Next, I found myself in a group with DD, LVG, Mo, and Natasha, working to catch Lyne. We all worked well together until Mo was dealt some more bad luck with a broken wheel. Eventually it was DD and I working to close a gap on Laura, which never happened. I ended up 4th, behind Laura, and DD came in right behind me. I was happy with the day. It feels like my legs are finally coming back around, after having the flu. My head is back in it, and I rode tactically and technically smart. I'm ready for more racing, but not more traveling...hmm.

Good weekend to end a long and stressful trip. Bomb-diggegy teammate Anna graciously gave me the big guest room with the comfy bed so I could get my beauty sleep. Although I wasn't able to win the series, I know the solid sleep and good company attributed to a solid Sunday.