Giving the new kit some love... 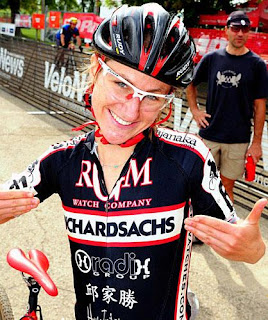 Off to Madison, WI on Thursday morning, where Bonnie and Carmella greeted me with warm hugs and Shelley’s smile. I stayed with Bonnie for the night, before they headed to Wisconsin Dells on Friday evening for the Shelley Glover Skiing Education Foundation benefit century ride. I was passed off to my gracious host-mom, Amanda for the weekend. Amanda was my mom, handler, chauffeur, and chef….she made the weekend possible. HUGE thank you to her!

I found the course very much to my liking. It had some power-course aspects, but it also held twisty-turny switchbacks with tacky mud to absolutely rail the corners. There was one fast barrier section, so I was going to need my spry legs to show up… not the lethargic stumps which boarded the plane to Vegas. There was also a hillside with railroad ties built in as the run-up.

I squandered another front-row position with a poor start and found myself sitting outside the top ten in the first minutes of the race. A lot of times I find myself in no-man’s land, by myself so it can be difficult without rest to move forward. Today I was able to make the bridge to rider’s wheels, stick there and recover a bit, before bridging to the next wheel. This I learned from getting dropped in every race in France while frantically trying to surf bumpers in the caravan. Nice. Eventually I found myself on Sydor’s wheel, trying without success to reel Georgia in. In the final laps a hard-chasing Butler and Dee Dee closed the gap on Sydor and myself. While I am confident in my sprint, I don’t like races to come down to that because you never know what will happen in the final meters of a race, especially when drag racing to that white line for the final time. Plus it’s fun to attack, see how hard you can go for as long as possible, to see an immediate gap, to make your legs howl and your lungs scream…it’s fun to inflict pain, eh?

On the final lap, going into the second portion of the course I threw in an attack. I was feeling good on the run-up, so figured I could stick it until the finish. Yes, I was confident, but oh so relieved to cross the finish line: 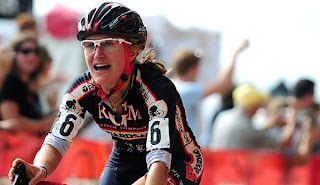 Pics from Dave McElwaine at Trailwatch.net