Providence greeted us with blue skies and warm temperatures. After pre-riding on Friday my dad and I visited with some family, Joan and Zane in Somerset, MA, just a half hour outside of Providence. 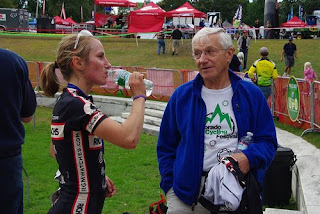 Both day’s courses were designed by Tom Stevens, and were awesomely fun. Saturday’s was fairly similar to that which I remember from 2006 Nationals. Sunday he switched it up a bit, adding even more twisting and tight turns with some more technical challenges. Did I mention the courses were flipping sweet? Seriously, they were like roller coasters, a playground for bike racers. The Providence Cyclocross Festival was also part of Interbike East, so all the hoorahs from Interbike were there. My favorite was the Raw Revolution tent…those bars are sooo tasty. Richard Fries promoted the race and did a splendorific job. I hope to race it again next year, and I hope it becomes a World Cup…how sick!? 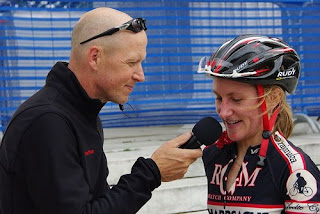 An impressive field lined up on both days, made complete with Katerina Nash, Mary McConneloug, Mo Bruno-Roy, Kelli Emmet, Meredith Miller (fresh off of Road Worlds), and Lyne Bessette. Mo took the hole shot on Saturday, with Nash on her wheel, and me on Nash’s wheel. When Nash went passed Mo, I followed her wheel, sticking to it for the first lap. But soon I couldn’t match her power and accelerations out of the corners, and Mary quickly picked me up, telling me to hop on her wheel. I think I was a bit blown from trying to maintain Katerina’s mach speed and couldn’t hold Mary’s wheel either. She went through me, and soon Meredith had overcome her last row start position and had bridged to me. I happily let her come passed and sat on her wheel to recover. When I saw that Mer was bridging to me, I had hoped that perhaps we could work together to bridge back to Mary. But Mary was one bad motor scooter and had rode her way to within 10 seconds of Katerina. I was also not feeling the strength to pull through, and was content with drafting for a bit. Soon it was clear that it was going to be a race for the final spot on the podium. On the second to last lap I made my plan for a prime spot to attack, and executed it on the final lap. The course held quite a few pavement power sections, and it was also fairly windy. So I didn’t want to go too early, given that 3 of these power sections were in the last 1k of the course. In the second to last power section I made my attack, and took my line into a hard right kicker which then led into some single track before spitting us into the finishing 200m. It worked and I took the 3rd spot, with Mer close behind. 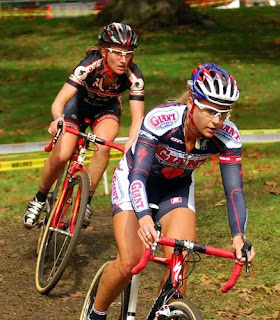 Da boyz fared some flats in their race…all of them flatted. So, a bit discouraged, we went back to hotel to get ready for a tasty seafood dinner. Then Josh, Dan, Sam and I all crammed into one room with a lot of red bikes! The next morning, a crisp blue sky bid us good luck in our races.