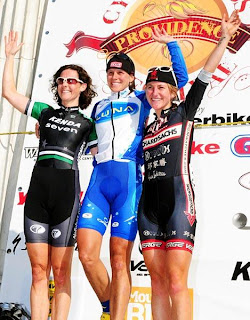 Sunday's course proved to be more technical, as Tom Stevens threw in some more tight turns and off-camber sections. The race quickly split apart with Katerina taking an early lead. A bit of a gap to Mary and a bit of a gap to me. For the first couple laps, there were 10-15 seconds between the three of us. However, with 3 to go I began to fade a bit and my gap to Mary grew as Meredith was inching her way onto my wheel. But the course was more mtb-ey, with less flat, pavement, windified, power sections. Because of this, it was easier to be alone to take your own line, than to be with a group and drafting. Indeed, Meredith was with a group of 3 or 4 others, not really gaining any ground. As soon as she attacked that group, she was able to chew up some distance to me. In the end, no one made contact with anyone in the front 4 riders, yet we all had carrots and chasers to keep us pounding on the pedals. I was pleased with this race because I felt it was an overall solid ride, as I rode strong throughout the entire race, instead of having sections I was stoked on and sections I was suffering on, as was Saturday.

AND THEN, the boys killed it! By the time I was able to get to the pits, I saw that Timmy J and Jamey D were riding away from the field, but Dan was charging hard in fourth. Josh was sitting in 5th or 6th, and eventually the two joined forces. Dan broke free and made his way comfortably to third, however Chris Jones eventually gained this distance back and stole the final podium position. Dan holds strongly onto the Verge NE series jersey and wears it prettily...not sure what his goal is fashion-wise!? Will had a tough start and it wasn't until about halfway through when his legs started to come around. He crushed the second half of his race, moving up from 17th to 8th, right behind Josh. 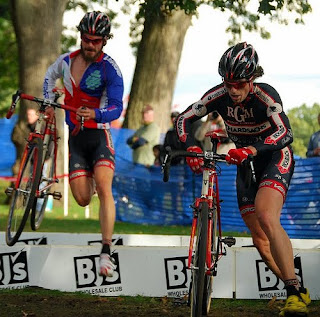