As soon as I had a training ride without getting rained on, and a hint of blue sky and shiny sun tapped me on the shoulder, I received a picture from Brother Dan of his snow-covered roof in Boulder. I read updates all over Crackbook and Twatter with the words: snow, cold, winter, miserable, wtf?, epic, real cyclocross weather...and I balked. That same weekend I was in Providence, RI enjoying 60 degrees, cloudless blue skies, and such a powerful sun which I had not seen since the overpowering one in Vegas. Lights, too many lights was a harsh transition to 10 days of getting rained on. So I was in glee when I found out I was on the right side of the country, weather-wise. But weather is fickle. And as soon as my dad and I pulled into our driveway after the weekend of racing, leaves blew the door shut behind us, and with it a stinging nip to the air.

The next morning I awoke in post-race stupor, rubbing my blurry eyes. And rubbing some more and squinting. No, the white on the ground was not snow, but it was indeed the first hard frost. I didn't want to look at the thermometer, but I had to...for the sake of savoring every bit of motivation to actually ride my bike. We have one of those round thermometers, with all the numbers listed and an arrow that points to the temp, like a clock. Half of the round face was covered in frost, but that was ok because it was covering from 30 degrees and warmer. Our little temperature needle was shivering in his boots and holding his finger just above 20. Coffee to my right - I downed a steaming cup right there.

That has been the story for the last 5 days. The good news is that it's been so cold that even the clouds froze and shattered away, leaving us with a fairly clear sky and bits and pieces of the sun. By 11:30a the frost is but a couple droplets of dew. Our little temperature needle has been warmed enough to lift his arm to around 38 or 42, or a massive 45 that I wallowed in today.

Please, I hope you don't think I am complaining. Because an already gorgeous Vermont has reached a level of beauty that can only be achieved in Sainthood. And ya gotta believe me here, because I forgot my camera and my Iphone camera is definitely not designed for capturing Sainthood. 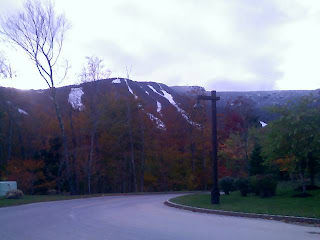 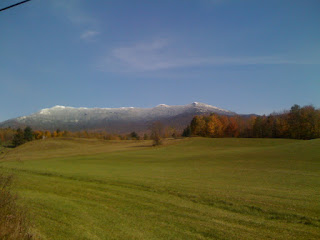 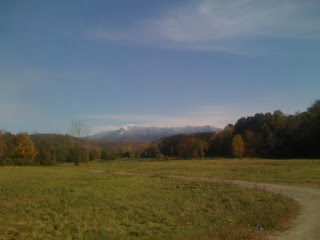 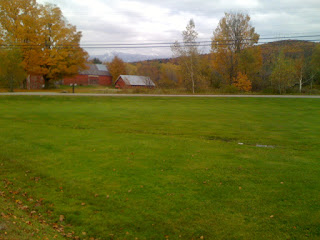 Just as the leaves were hitting peak foliage, the sun decided to come out, and Old Man Winter decided to grace us with his presense. Which means white moutains and vibrant orange, red and green hills made enchanted with the sun lighting our soggy-bottomed green mountain state.