SRAM's Chris McKenney has helped me with my bikes at a few World Cups this season.  The last race he helped me at was the Hoogerheide World Cup where a bike exchange once a lap was necessary.   In any sport a champion becomes a champion through hard work - but this doesn't simply come from the athlete. An athlete is comprised of a support system. I believe this is the same in all sport, in all cycling disciplines, but predominantly in cyclocross. There are so many details and sides to cyclocross that it is actually a circle of a very small world. You have heard my side of it, and now here's a chance to hear another side and arguably the harder job...standing in the pits!  Below is Chris McKenney's view from the Pits.  You can find more of Chris at www.velopix.com or on twitter @thatVelopixguy. 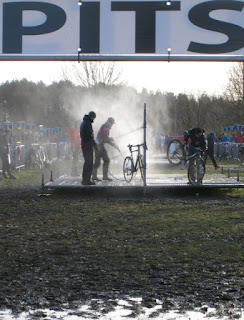 When the gun goes off the scramble begins-not quite a sprint but certainly elbows are sharp getting to the first turns. Eyes are focused ahead while keeping lookout for a wheel coming by. Hands wrapped on bars with a firm grip. Don't give up your position.

View from the start of the final World Cup of the year? Not exactly-the view from the pits is a mirror of the race. But the material post is only shown when something goes wrong. And something did at the start--a crash 50 meters in took down Amy Dombroski as I waited with her spare bike. From pit box 14 one eye was scanning the rise to find her clear and riding, the other focused on the big screen as I saw a rider in white go down. Chaos as the pack came by in a bunch-everyone looking for their racer. Amy was nowhere to be seen but I hadn't heard her name called as TV showed Caroline Mani still on the ground at the start. Did she go by? Do I switch sides? Rarely do I get nervous in the pit but changes are needed today and have to be spot on.
Box 14 was the last box on the front which is also first on the back. Marianne is charging up the hill to the other side of the pit. There's Amy, she's up and riding but a half lap down on the front side. A less than happy rider needing a bike. Racers need to find the flow, no different in the pit. Bike wash and the checklist. Wheels good, frame good, shifter twisted. Straighten shifter while keeping watch on riders coming. Quick run of the gears, derailleur touching spokes. Not good on a day with mud and a few steeps. Old school adjustment-solid pull on the body to align it and tighten the limit to hold it. Just as Amy comes by. A shout that a bike is ready.
Everyone else has a fresh bike and the washers are humming in the background. When Amy comes in there is both suffer and frustration-not sure if she even hears me during a bike exchange. As the minutes tick she pulls herself closer to the pack, while not a result still a ride worthy.
The day in the pits? Rinse, lube, repeat with the details hiding in the background. The racers have the ups and downs, emotions and passion visible to all. The mechanic stays in the mirror-to be a muted reflection of the day. Amy had the hard trip to the pavement reflected in a gutty ride. Happy to keep the mirror clean for her today.