My day started on Thursday the 17th at 5am when Rick brought me to the airport in a balmy
-14 degrees. Good thing we were able to cram everything in his car because Ol' Bessy did not want to start! To Denver, then to Dulles. There was a delay in Dulles because of snow and de-icing the plane. Then someone lost their cat on the plane so it was delayed another half hour. Ended up leaving about 3 hours later than we were supposed to. On the flight from Dulles to Brussels I was crammed in the very middle seat and it was so so hot. We made it to Izegem, where the Belgium House is and our soigneur, Els, had a fresh pot of soup waiting for us. Kerry and I went out for a spin along the canal. I was going to bring the camera but it was misting...but warm finally! About 40 degrees, which felt tropical compared to Durango. Then, in attempt to stay awake, we bought some chocolate. Els made curry chicken for dinner and now I'm finally going to bed...that was a long day. 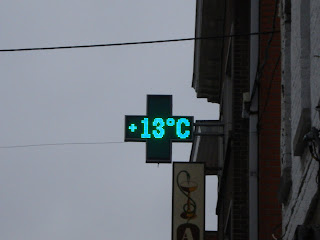