Yesterday there was a nordic ski race at Purgatory called the Tour de Ski. My housemate, Mary dragged me out of bed and into the freezing cold for it - she promised me coffee from Bread, so I was all for it. It was really really cold, so the snow was real slow. Even the people who actually waxed were moving like snails. Afterwards, Zia Taqueria provided us with a buffet of burritos, chips and salsa, and an open bar for the lushes. We started the day off with a chairlift ride up to the top of one of the lifts, where we skied down to the start in a little valley. The 20k loop was rolling, but apparently the 40k loop was 'gnarly' with an elevation gain of 2,300 ft and a Birds of Prey-like descent. The course was above 11,000 ft - boasting the highest elevation nordic race in the country. One of the best parts was bombing back down the mountain on skate skis - I was able to snap a few pictures: 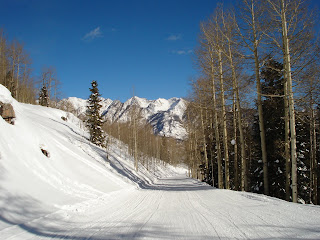 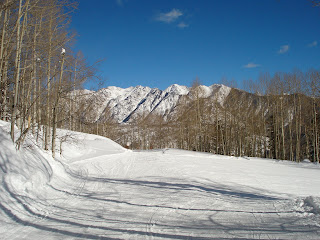 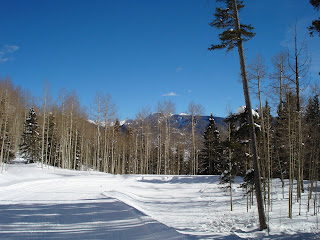 And then I woke up this morning to see that a beer bottle had been thrown through my rear windshield.