From a skier's eye the weather has been incredible. It's the exact thing a skier would put on his or her wish list. SNOW, snow everywhere. 14 degrees to 28 degrees. Perfect...and to think I used to be a skier...

...I on the other hand, have not left my house since last Wednesday. I have turned on my heat to 90 degrees and I have been huddled in a cocoon of down blankets and jackets, drinking tea and eating soup, taking bubble baths and living in flannel and fleece, cutting down trees in my yard to keep the fire going, and turning my oven up real high and leaving the door open.

Really? More like not really. I'm not happy about the snow and the cold temperatures. I'll admit that I have turned soft since moving to Boulder, and 30 degrees feels like I'm stuck in an ice box. I have turned the heat on during the day, not to 90 degrees, but to 60 degrees which contests to how soft Boulder has made me. I have been a bit of a hermit the passed week, but that's because I was down and out with a cold. I raced yesterday. Really. In 14 degrees, all the Boulder crazies rode our bicycles around in circles on a slick and snowy track, occasionally jumping off to jump over things. 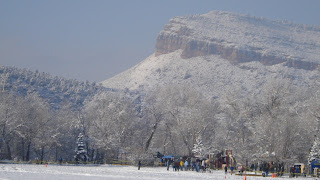 The race was in Lyons at some little park that I didn't know existed. It was very pretty. 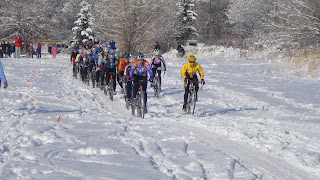 Here's the start. Lara and Anne took the whole shot. Kerry claimed the State Championship title for the second year in a row. 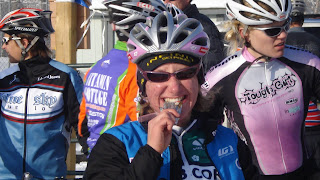 This little silver packet of caffeine was what kept me going yesterday. Well that and four layers of tights, 3 long sleeve base layers, a thermal team jacket, hand and toe warmers, a hat that kept falling down and covering my eyes, winter ski gloves, wool socks, a menagerie of heckling and cheering friends, and knowing that I had hot chocolate and a ridiculously warm Patagonia puffy jacket to keep me warm as soon as I crossed the finish line. 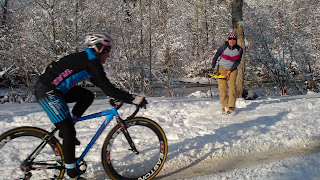 Here's the champion cowbell ringer. She got me to smile. Imagine that. 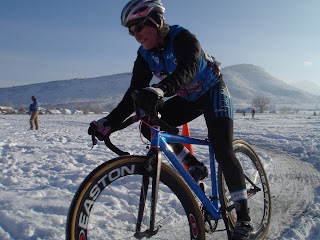 Not only did I have hot chocolate waiting for me in the car, but Heather and Alan came to watch and brought bread pudding muffins from Tasha's bakery, Breadworks.


Pictures are courtesy of Frisky Fisky Fotography and Chellie's Champion Cowbeller Cheers
Onto the yellow brick road toward Kansas...